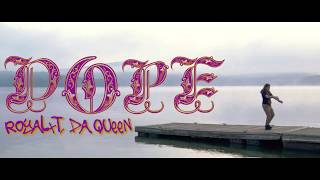 A couple days ago the music video I directed for DOPE by RoyalxT, Da Queen was released and we got over 1000 views in the first day. I know to a lot of people thats not that exciting, but it was for me and Tara.

It was a lot of fun to shoot this video. She rented a Sony a7sii with a metabones adapter for a Canon 16-35mm L Series Lens for me. I've been wanting to shoot on that set up for awhile and it was exciting to get my hands on it.

I shot most of the video on the 16-35mm. There are only a few shots I used a different lens on. Some of the closeups in the red/blue scene I used my Canon 50mm. Also for every shot on my stabilizer I used my Canon 24mm (Pancake) lens.

Besides the technical stuff this video was really fun to shoot. Tara really ran with my ideas. She never hesitated when I asked her to wake up at 4:30 am so we could catch the sunrise over the lake at moraine. It was one of the most beautiful things I've had the chance to film.

About a month before we shot the video we were making the plan and I said it would be good to go in the morning because we might get lucky and get some fog. I couldn't imagine it would look as amazing as it did that day. We had spent the whole week before worrying about the rain. It was supposed to rain our entire shoot. Luckily we never got rained out once because we condensed our 3 day shoot into one long day.

6:10am Arrive at Moraine State Park

around 9:00am (Change wet clothes from the dew covered field)

10:30am Film road scene on the truck route in Arnold.

4:00pm Try a different set up involving hanging the seamless from deck.